As a Partner with the Google Cultural Institute’s Art Project, Museo joins 250 of the world’s most acclaimed art institutions on the world stage, including San Paulo Street Art, Brazil; Musee D’Orsay, Paris; Museo Nacional de Arte, Mexico; and Tokyo National Museum, Japan. We are honored to be able to feature DOC/UNDOC on GCI!

The launch of the exhibit on GCI corresponds with the publication of the trade paperback version of the original limited edition art book at the heart of Doc/Undoc. This City Lights Books and Moving Parts Press trade edition presents the journey of DOC/UNDOC in a widely accessible, affordable book that not only documents the original collaborative artists’ book, but also provides a reader with their own interactive, immersive experience. The book is available for purchase here. 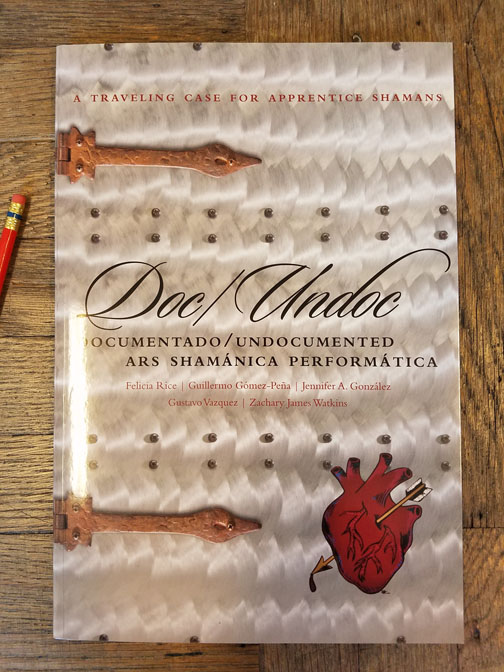 [Not a valid template]

Museo will be participating again this year – look for our invitation to explore the art of Frank Galuszka  on Slow Art Day, Saturday April 8th

Slow Art Day is an international movement to encourage slow looking and conversation. Look for our invitation to get your cell phones out and participate this Saturday – opening at 6am and continuing all day.

Click to preview or read the article in the Wall Street Journal:

You may browse through reviews of Eduardo’s exhibitions, find book excerpts and read catalogue essays, and view videos. We hope that these thoughtful pieces will add to your enjoyment of the work in the gallery.
For informal remembrances of Eduardo and memorials please visit About Eduardo section.

It’s a great joy to me, even in these circumstances, to say anything about Eduardo because I have been his ardent fan for about forty years. I knew him when he was a young man at UCLA and I instantly knew that he was an extraodinary human being of great gifts and he has just continued to demonstrate that the rest of his life. I’m happy I got to see him after UCLA and got to see and enjoy his work.

He had the one thing that I think is necessary: he had a sense that he possessed the whole universe of painting and he moved around in it without any kind of hesitation. He had a feeling of freedom into that universe which is absolutely remarkable for a painter because most are tied down to this or that, mainly to their own egos. Marvelously, Eduardo had very little ego, truly a marvel. But he was an immensely strong person and it was evident even when he was a young man.

I’ve given my interpretation of his life many, many times to other people exhorting them to follow his path.  What happened was he applied for a grant. He applied for a grant because he loved Hieronymous Bosch. He was absorbed by him  I mean passionate about him. And he didn’t get the grant.  Now, you know, what do most people say? Oh dear, I didn’t get the grant, what will I do? Apply for another grant! What he did was earn money in a very difficult way, he had to bicycle down to the middle of L.A. to work like a Billy-O in a machine shop for I don’t know how long. And he got the money together and he went to Spain because that is where Bosch is.  He simply submitted himself to Bosch and in that submission, of course, he became enormously powerful as a painter.

The worst thing that can happen to people is they never submit themselves to anything, and there they are floating in a kind of limbo and it doesn’t matter what they do. The power to submit yourself and through that become strong is the greatest thing anyone, a painter or anybody, can do, ceratinly anyone in the arts at the present time when there is no powerful traditionn to make you this or that. You are on your own to create not just yourself but the whole meaning of your life, in terms of art. So, he was able to do that. It’s a great gift, of course, to be able to do that. He left for us such a glorious view into the world of painting. There is not any painting that you can look at that isn’t marked by joy.  This is what he was in person, a kind of marvelous sweetness and strength and joy lived in him all his life. This ia such a rare quality that our loss is enormous. Even the people who never knew him, never saw him or had anything to do with him have lost something of immense value, and something that will not be repeated anytime soon.

Mary Holmes was a gorgeous, long-legged painter, teacher and mother who loved men even more than she loved horses. She was forty five, smarter than most, outspoken, iconoclastic, with a quick eye for what mattered: painting. She was then and still is at ninety an inspired painter and teacher, a delightful person, a true breath of fresh air. She was a lecturer in Art History when Ed was nineteen and an undergraduate at UCLA. Mary liked Ed immediately and he liked and respected her right away too. In her classes she spoke about the seriousness of art, the richness of painting; that with authenticity and great courage the masters pull their inspiration from within; that the mind must be set aside in order to see; about the curse of self-expression and how without discipline there is no freedom. Mary saw that Ed had a unique gift. She supported his good instincts and encouraged his Spanish quest. She wanted him to discover his own heritage, the rich tradition of Spanish painting. In 1967 Mary moved to Santa Cruz to teach at UCSC where she later named Ed for a faculty position in painting. She knew his extraordinary talents and that his contribution would be significant. I always loved visiting Mary with Ed because the mutual affection and respect were palpable, great souls both. I felt honored to be there.

The Carrillo Scholarship was set up in honor of Art Professor Emeritus Eduardo Carrillo, who taught at UCSC until 1997. Scholarships support student art projects in the areas of sculpture, drawing, and painting.

As organizers prepared for the opening of the Santa Cruz Film Festival, an award-winning Los Angeles filmmaker and his crew visited locations throughout Santa Cruz County, capturing interviews and images relevant to the memory of Eduardo Carrillo, a prolific painter and muralist who taught at UC Santa Cruz from 1972 until his death in 1997.