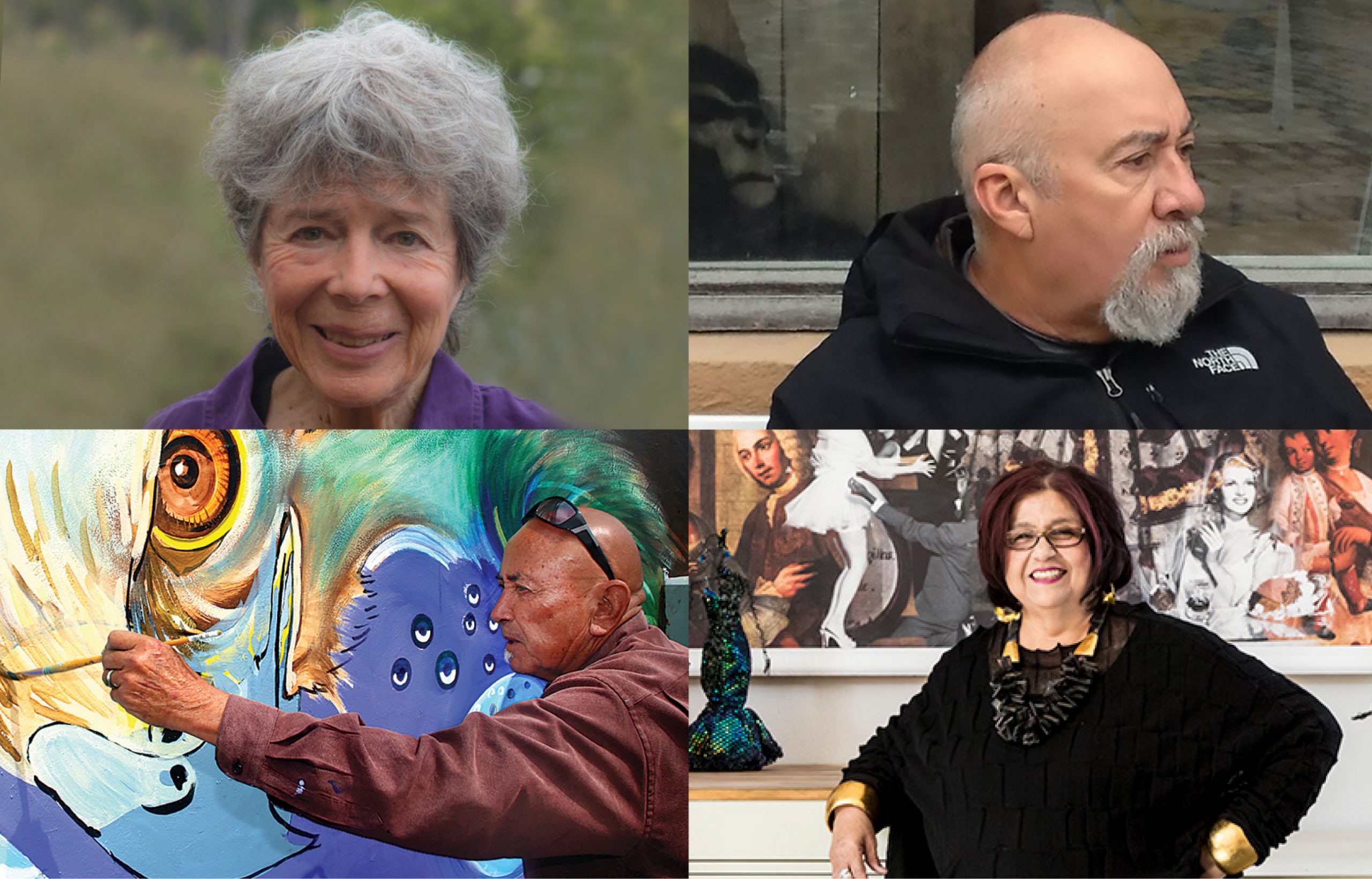 The Califas Legacy Project has unified the Monterey Bay Crescent through public retrospective and multi-generational exhibitions, zoomed in opportunities, streetside art viewing, portable murals, documentary videos, panel discussions, and a Latinx-based symposium. In 1982, Professor Eduardo Carrillo conceived of the “Califas: Chicano Art and Culture in California” conference to bring together artists, scholars, and creative social instigators to take stock of La Raza y El Movimiendo after several decades of political awakening and action. Together with Philip Brookman, Tomas Ybarra Frausto, and Juventino Esparza, he assembled a remarkable group for a multi-day symposium. They argued and agreed that the Chicano movement in all its variety and manifestations was very much alive and needed continued nurturance.

Now, almost forty years later, the Califas Legacy Project features the art and ideas of our region’s Chicano/a/x and Latinx creative leaders, the elders in the movement.

Our commitment is to secure the preservation of these artists’ legacies and awaken a new generation to the richness of the Monterey Bay Crescent artists contributions.  Theirs is an un-contained influence – linking the powerful social movements of the 1960s to the next generation of Latinx and other artists. The exhibition surveys work from over four decades per artist, thereby sharing their artistic evolution and making visible what has been here all along.

Guillermo (Yermo) Aranda is an elder and wisdom keeper of the history and ancestral teachings for Chicano/Native/Mexica identified peoples. He was the co-founder of El Centro Cultural de La Raza, a cultural art center focusing on Latino and Indigenous Art forms. As the Centro’s first Administrative Director, Aranda initiated the Chicano Park Murals in San Diego in 1973. Chicano Park is now recognized by the City of San Diego and the State of California as an historical site.

Ralph D’Oliveira has painted more than 100 murals in California and abroad during his 40+ year career as a muralist. He has done dozens of projects with schools and school children. In 2013, he traveled to Norway to do a mural project in Trondheim. He coordinates his projects collaboratively with neighbors and students in schools. He views all these projects as a way to build community. Ralph draws on his multicultural background incorporating native Chumash and Mexican roots.

Carmen León is a painter and teacher of art. In 1975-76, she was involved with a grassroots arts center, the Academia del Arte Chicano de Azlan, painting some of the first murals in Watsonville. In 1985, she began teaching art in the schools, focusing her involvement with the Latino community and drawing on her Peruvian and Mexican heritage. León was one of the co-founders of Galeria Tonantzin in San Juan Bautista, CA, a venue for women’s art.

Amalia Mesa-Bains is a curator, author, visual artist, and educator. In her home altars, ofrendas, and writing, she examines the formation of Chicana identity and aesthetic practices, the shared experiences of historically-marginalized communities in the United States, especially among women of color, and the role of multiculturalism within museums and cultural institutions. Her work is in collections worldwide and in 1992 she was awarded the MacArthur Fellowship.

Zoom Reception: February 3, 2020 @ 4:00-5:00pm | Register Here
The reception will feature a tour of the virtual exhibition hub, website, and a panel discussion with Amalia Mesa-Bains, Philip Brookman, and others.